Is Bitcoin And The Other Cryptocurrencies a Crime Weapon? And How Can this Be Solved?

This article will briefly examine the existence of bitcoin (and other cryptocurrencies), how bitcoin has become an integral part of many criminal networks, and possible changes that can be made in the future.

While the development of bitcoin – and other comparable cryptocurrencies – seems to have provided users with a unique array of benefits, these benefits have not come without corresponding risks and costs. Due to the distinctively unregulated nature of the cryptocurrency market, it has naturally been frequently used by a wide variety of criminal enterprises.

Legislators around the world continually find themselves in a very unique position. While they do not want to interfere with markets that may be able to eventually regulate themselves, they also do not want to willingly stand by and allow for easier conditions for committing crimes. Furthermore, due to the fact that cryptocurrency exchanges are typically much more difficult to monitor than ordinary electronic transactions and the fact that these exchanges often take place on an international level, there ultimately exists an even more complicated regulatory environment.

Though there may not be one clear path forward to a world where cryptocurrency can be both entirely safe and productive, it certainly seems it is worth the effort to consider the possible means of arriving there. This article will briefly examine the existence of bitcoin (and other cryptocurrencies), how bitcoin has become an integral part of many criminal networks, and possible changes that can be made in the future.

Bitcoin – which was initially released in January 2009 – is the world’s first and most widely recognized form of cryptocurrency. Cryptocurrency is a medium of exchange that exists explicitly in the digital world. Using cryptography – the art of protecting the information using a complicated code – financial transactions can be made in a secure way. The ownership of a specific cryptocurrency can be identified using a public ledger.

As of June 2018, one bitcoin is worth approximately $6,500. This is significantly less than the peak value that was witnessed in December 2017 ($19, 343), but also significantly more than values reported just one year ago. The market for bitcoin, overall, is less predictable than most other currency markets. However, because of the digital asset’s unique characteristics – decentralization, easy exchanges between peers, and the innovative use of digital technology – there are still many individuals who believe that bitcoin, or cryptocurrency in general, will likely function as an international currency of the future.

What are the non-criminal uses of bitcoin?

In general, there is relatively little belief that bitcoin will replace the use of traditional currencies (such as USD, EURO, etc.), rather, it will function as an alternative that supplements the global currency markets and also makes them significantly more competitive. Like traditional currency, bitcoin’s value is fundamentally determined by whatever people believe it is worth.

Contrary to the primary focus of this article, there are still many legitimate, legal, and highly accessible ways that an individual can use bitcoin in exchange for specific goods or services.

Clearly, there are many reasons that a well-intentioned person may want to pay for certain things using bitcoin. Because the correlation between the value of bitcoin and the value of most local currencies is relatively limited, some individuals prefer to use bitcoin when the exchange value is particularly high and use traditional currencies when the exchange value is particularly low. Considering that both currency markets fluctuate over time, diversifying your range of available payment options can decrease the risk of your current holdings.

There are many innocent reasons that a vendor may choose to accept bitcoin as well. Not only will they be able to enjoy the same apparent benefits of diversification, but using bitcoin can help reduce the risk of chargebacks and also make it significantly easier for vendors to operate beyond borders and access a generally broader market. Additionally, even if they are not engaged in any illegal activities, individuals on both sides of a given transaction can enjoy the added layer of privacy that only cryptocurrency can offer.

The future of bitcoin – and the cryptocurrency market as a whole – remains relatively unclear. Generally, it seems that there will be a wider range of cryptocurrencies to choose from and that cryptocurrencies will generally be accepted at an increased number of locations. However, bitcoin’s widespread use in illegal markets and its incredibly unregulated nature are both legitimate reasons for the public to be at least somewhat skeptical.

How is bitcoin used for illegal activities? 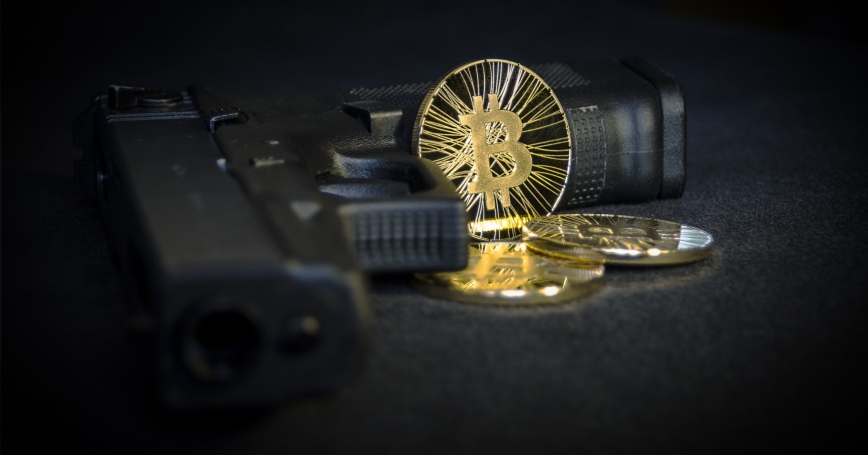 Unfortunately, the characteristics of bitcoin that many people innocently enjoy – relative privacy, the removal of an intermediary, ease of international transactions, etc. are also the characteristics of bitcoin that happen to benefit criminal enterprises the most. Like the ski mask, bitcoin was not created with the intention of being compatible with criminality, but its increased use by criminals is something that certainly cannot be easily ignored.

Currently, there are many different ways in which bitcoin is being actively used by criminals.

Essentially, if an individual or organization seeks to engage in an illegal activity that can be entirely organized via the internet, then they will have many reasons to use cryptocurrency rather than traditional payment options. On the rare occasion that a law enforcement organization is able to trace these illegal activities to a specific IP address, the burden of the prosecution is still usually not entirely satisfied. The law enforcement agency (depending on the jurisdiction in which these activities are taking place) will still need to prove this activity took place knowingly and was not a consequence of deliberate digital misdirection.

How can the use of bitcoin be made safer?

One of the difficult things about regulating bitcoin and the rest of the cryptocurrency market is that now that this technology has been introduced around the world, it is seemingly impossible to permanently get rid of it (or even get rid of just part of it). Even if someone were to take the most extreme stance on the topic imaginable – and advocate for the total international ban of bitcoin – a replacement alternative would inevitably emerge in a matter of days (or possibly even hours).

Staying ahead of the innovation curve in the cryptocurrency industry is something that is seemingly impossible. Instead of banning cryptocurrencies outright, it would be much more rational to try to adapt to the existence of current systems.

Fortunately, it seems there are at least some things that can be done in order to decrease the use of bitcoin as a medium of illegal exchanges without destroying the cryptocurrency market as a whole.

Unfortunately, there is no clear path forward that will immediately resolve all of the issues associated with bitcoin and other cryptocurrencies. However, due to the fact that the cryptocurrency market itself is still less than a decade old, it seems that nothing is permanently set in stone and there are certainly some useful changes that can be made.

Though it certainly has a wide range of risks associated with it, the many benefits that are exhibited by the cryptocurrency market suggests that this market is one that is here to stay. The fact that bitcoin is frequently used as the primary medium of exchange for criminal enterprises around the world certainly gives the public a legitimate reason to be concerned. But with a concentrated effort that focuses on deterring criminal activity – rather than the simple use of alternative currency – it seems that progress can certainly be made in an objectively positive direction.

Please note, that is not a bit of financial advice, nor the WhaleToBe team’s view.

Over 36 million crypto-wallet created. Is that an indication for the uptrend?

ISIS USED BITCOIN TO FUND THE TERRORIST ATTACK IN SRILANKA